Across the Arab world, I hear the same distinctive sounds; the instrumental melodies are strikingly identical in emotive strength, tonal tone, and rhythmic drive. Although there are variations, the sounds belong to one group of people. Many of the instruments used in the Middle East are from the strings, percussion, and winds families. In Palestine, some traditional musical instruments include the mijwiz, shebbabeh, yarghool, rababeh, nay, buzuk, qanun, tabla, and oud.

An ancestor to the Scottish bagpipe, the mijwiz is a woodwind instrument with bamboo double-pipes and a single-reed. Hence, the Arabic meaning “dual”. Every pipe has five to six holes for fingering and a range just short of a full octave. To use the instrument effectively, the player needs to practice “circular breathing” which is a technique used to produce a sustained tone without disruption. It works like a human bagpipe by inhaling through the nose while also pushing the air stored in the cheeks out through the mouth and into the mouthpiece. The section between the holes and the mouthpiece is used to control the tone. The mijwiz is popular in Palestine, Syria, Lebanon, and Jordan and is played as an accompaniment to either belly dancing or dabke. Normally, three people play the mijwiz at once in weddings or other festive occasions.

The Palestinian flute, the shebbabeh, is a classical part of Palestinian tradition and culture. It is one pipe with six holes in it that is used to adjust the tune and melody of the music. The key to learning how to play the shebbabeh is to learn how to blow on it. The first step to the blowing technique is to pucker your lips like you are about to whistle. The second is to make sure you can blow air out without making noise. The third and most important step is to put the side of the mouthpiece of the shebbabeh on the corner of your lips while letting the other side come exactly in the middle of the air stream. When you do this, you will notice where and in what angle the tone is produced. Some popular Palestinian folk songs that are played on the shebbabeh include “la bakol wala bashrab” and “3ala dal3ona”.

The yarghool dates back to ancient Egypt and is still used as a traditional woodwind instrument in both Egypt and Palestine. It’s similar to a clarinet, but more reed-like. It’s a woodwind instrument that comprises a double-pipe and single-reed (two tubes): a melody pipe with several holes (five to seven) and a longer drone pipe. The melody pipe has the fingering holes, and the detachable length on the drone pipe allows the player to alter the pitch of the drone. Like other musical instruments mentioned in this post, the yarghool can also be used as an accompaniment to belly dancing and dabke. Similar to the mijwiz, circular breathing is an important part of the instrument. Yarghool come in small, medium, and large lengths.

Another common string instrument widely known in different parts of Palestine is the Rababeh. They make it with wood, horse-tail fur, and leather. Its shape is either a square or a rectangular box with a string across it, and they cover it with leather on both sides. A bow is used to play the instrument by generating vibrations in the hollow box, similar to the violin. We commonly use the instrument in Bedouin music. The Arabs took the rababeh to Spain, where it then spread with the name rebec across Europe. People usually think of “Al-Farabi (10th century) as the first person to have mentioned the rababeh. However, Ali of Isphahan mentioned that the rababeh was used at the court of Baghdad two-and-a-half centuries before it was mentioned by Al-Farabi” (raqs). We consider it one precursor of the European violin.

The nay is a very ancient instrument. It is literally as old as the pyramids. It has been around for 4,500-5,000 years. It is a simple, long end-blown flute, the chief wind instrument for Middle Eastern music, and the only wind instrument for classical Arabic music (my-meriva). In the Egyptian pyramids, nay players are seen in wall paintings and nays were found in the excavations at Ur in Iraq. It is one of the oldest instruments in music still in use.

It is made from the same plant (the Arundo Donax) that is used to make reeds from oboe, saxophone, and clarinet. The nay is made up of nine segments which have specific acoustic and symbolic functions. They are often related to the nine parts of the body. Nays are constructed in various keys. In the Arab system, there are seven common ranges. Usually, experienced players own a set of several nays in various keys, but on any instrument, it is possible (albeit difficult) to play entirely chromatically. In the extreme lower range of the guitar, where the fingering is rather difficult and transitioning from the first octave to the second is quite uncomfortable, a minor exception to this law is found.

The Nay is also used for typical ‘falaki’ shows, which are short melodic sessions that express complaints about fate, the injustices of the world, and sentiments such as the sorrow of separation or lost loved ones. Although the ney appears very simple, it is extraordinarily versatile. 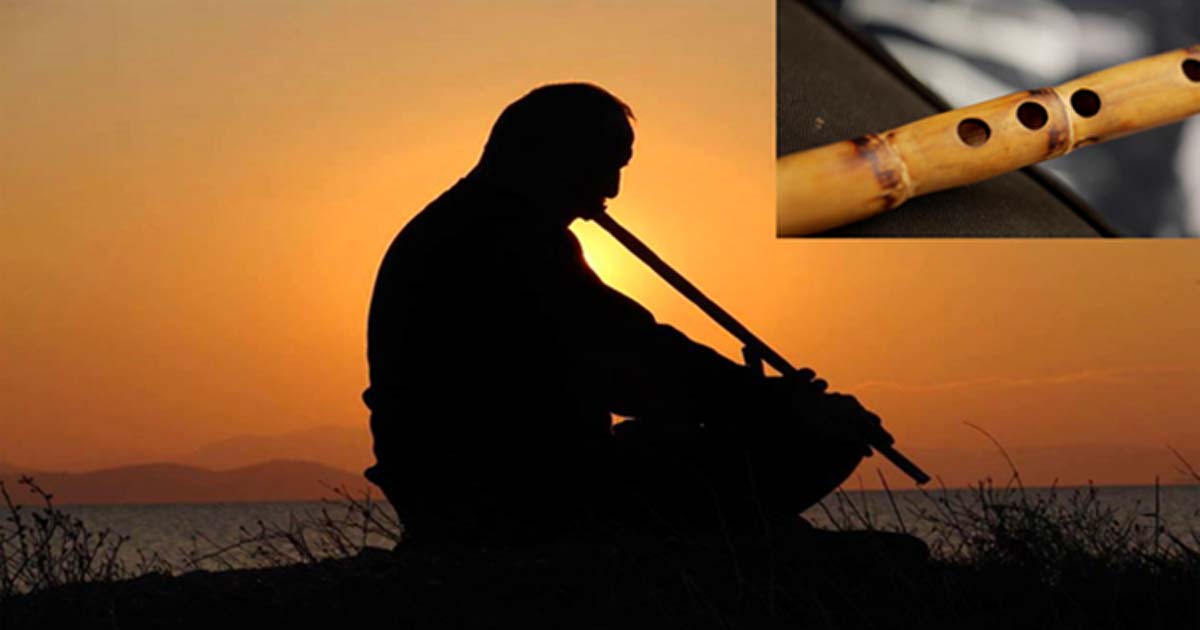 The Buzuq is a string instrument in the oud family and is a relative of the Turkish instrument: saz. It has a smaller body and a longer, fretted neck. The Buzuq is typically played solo and is a folk instrument from the Eastern Mediterranean (Palestine, Jordan, Lebanon and Syria). It is categorized alongside the other traditional instruments since, in the middle of the 20th century, it reached popular Arabic pop music.

There are two metal strings lines in the standard Buzuq, “a double (C4) and a triple (G3), played with a small piece of horn or a plastic plectrum” (maqam). In order to broaden their range, today’s buzuqs are made with three courses of strings. The metal strings give the buzuq a vivid quality of sound, along with the metallic tuning pegs. Before the Rahbanis made the instrument popular, the buzuq used to be associated with Lebanese and Syrian gypsy music. 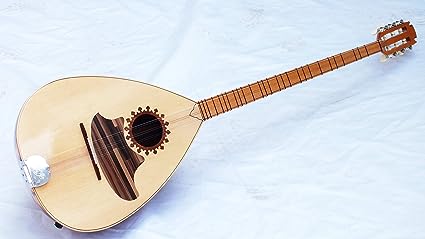 The qanun — Arabic for ‘rule’ or ‘law’ since it lays down the law of pitch for other instruments and singers — is a descendant from the ancient Egyptian harp and has been used in Arab music since the tenth century. It evokes the ancient culture and heritage of the Middle East, handed down over the ages.

It was introduced as early as the 12th century to Europe and became known as a psaltery or zither in its European form during the 14th to the 16th centuries.

The trapezoidal qanun consists of a flat board over which 81 strings in groups of three are stretched to produce 24 treble chords comprising three chords for each note (mideast web). The instrument is placed flat on the musician’s knees or table; the strings are plucked with the finger, or with two plectra, one plectrum attached to each hand’s forefinger (al-hakawati).

Playing the qanun to different melodies can be achieved. To modulate to another melodic mode, or maqam, the player needs to flip a few levers back and forth with the left hand while also playing with the right hand. The fingernail of the left thumb can be used to achieve modulation by quickly raising the tuning of specific strings. 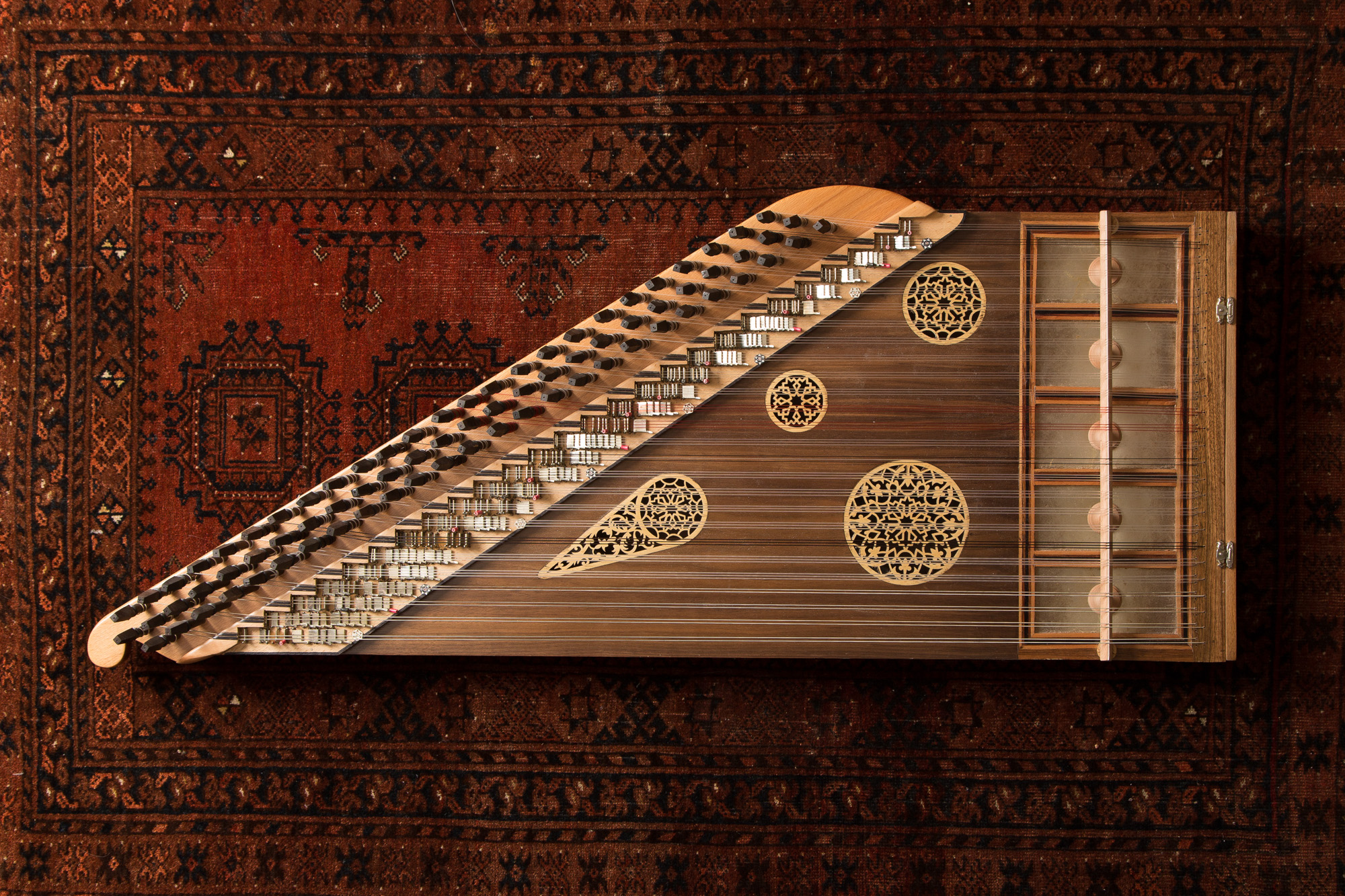 It’s never too early or too late for tabla time! It’s one of the most famous instruments in the Arab world and dates back over 1000 years. The tabla is played by the Palestinians, Lebanese, Moroccans, Egyptians, the Gulf, and many more. It is a goblet shaped drum that is part of the percussion family. There are different styles and techniques to playing the tabla. One part plays the high notes while the other plays the low notes. It is played by striking the tabla at various points and at different pressures; doing this allows the player to control the sound quality.

For example, to create the deep bass sound called the “doum”, the player should strike the head near the center with their fingers and palm and then take the hand off the head for an open sound. It is usually played on the player’s lap or standing up and placing it on the player’s thigh.

The tabla sets the rhythm for much of Arabic music. The player single-handedly controls the speed and dynamic of the rhythms. One of the most popular rhythms used in Middle Eastern music is the dumbek. It creates the beat to Arabic songs, and it is without a doubt played at every Arab wedding. Even if there is no table around, it is natural for Arabs to find anything they can beat on such as a tanjara (pot), table, chair, etc. 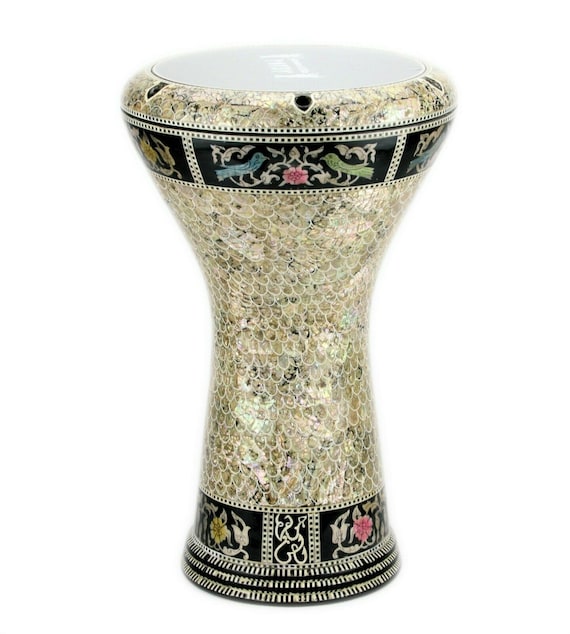 The Palestinian Oud is the most popular instrument in Arabic music and one of the world’s most ancient instruments. It is the ancestor of both the lute and the guitar and dates back to 3000 BCE. It has a short neck with no frets, allowing for notes in any intonation, and therefore a unique sound. Its name means a thin strip of wood which is used to make its round body shape. Some of the most commonly used woods for the bowl body are: maples, walnut, South American rosewood, and African coralwood. The body of an oud has a bowl-like back comprising 15-25 wooden strips and is surrounded by a fairly complicated soundboard structure. Inside its hollow shell, the sound of the Oud vibrates. The most common string combination is 5 pairs of strings tuned in unison and a single bass string (can have up to 13 strings) made of nylon or animal gut. A plectrum or feather (risha) is used to pluck strings. Modern strings are made of steel wound over nylon. Palestinian national sentiment is expressed through Arabic music using traditional Palestinian instruments such as the Oud.

The Sounds of Palestine

5 Palestinian Desserts to Make During Quarantine!